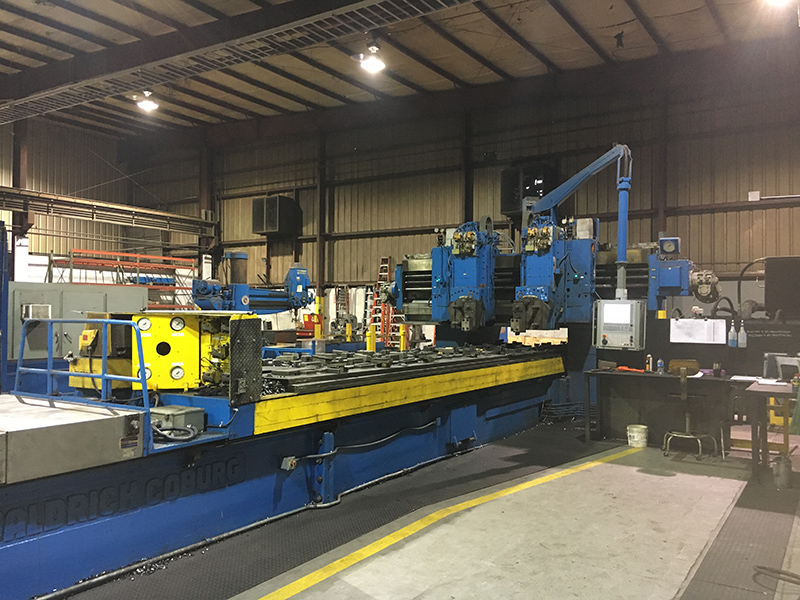 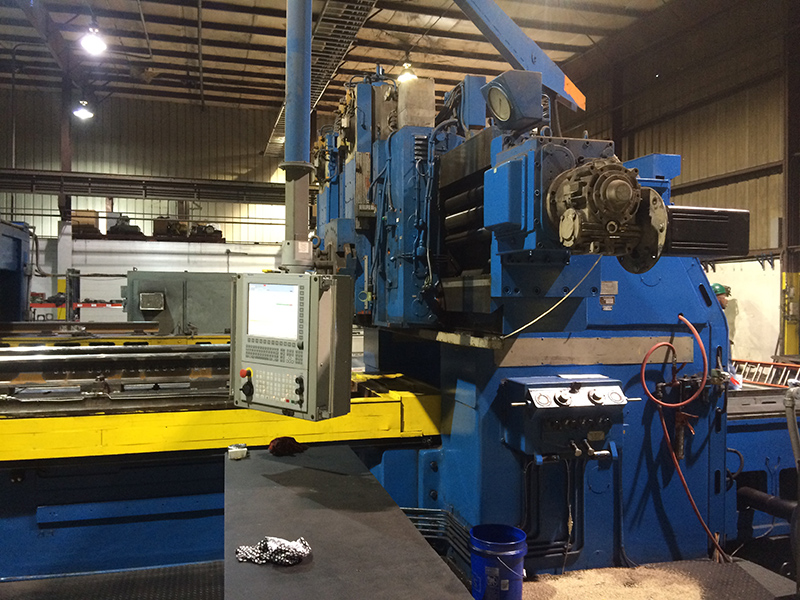 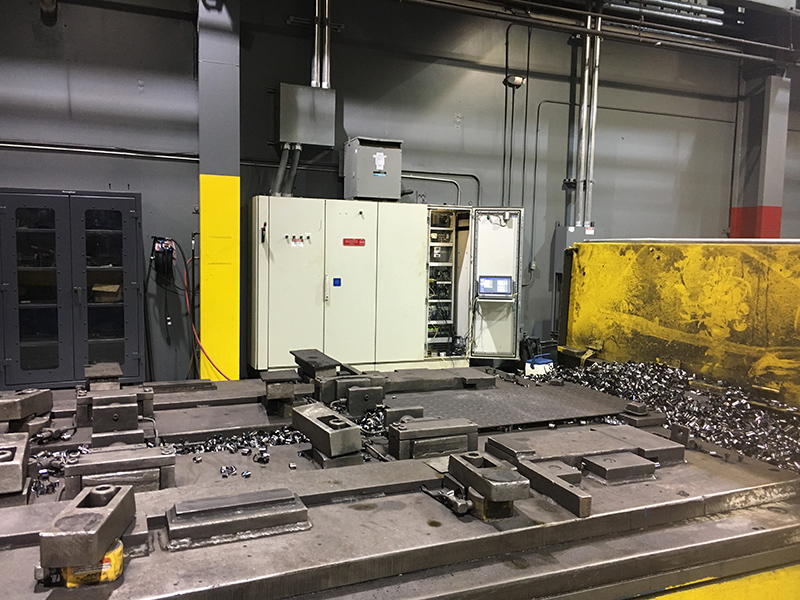 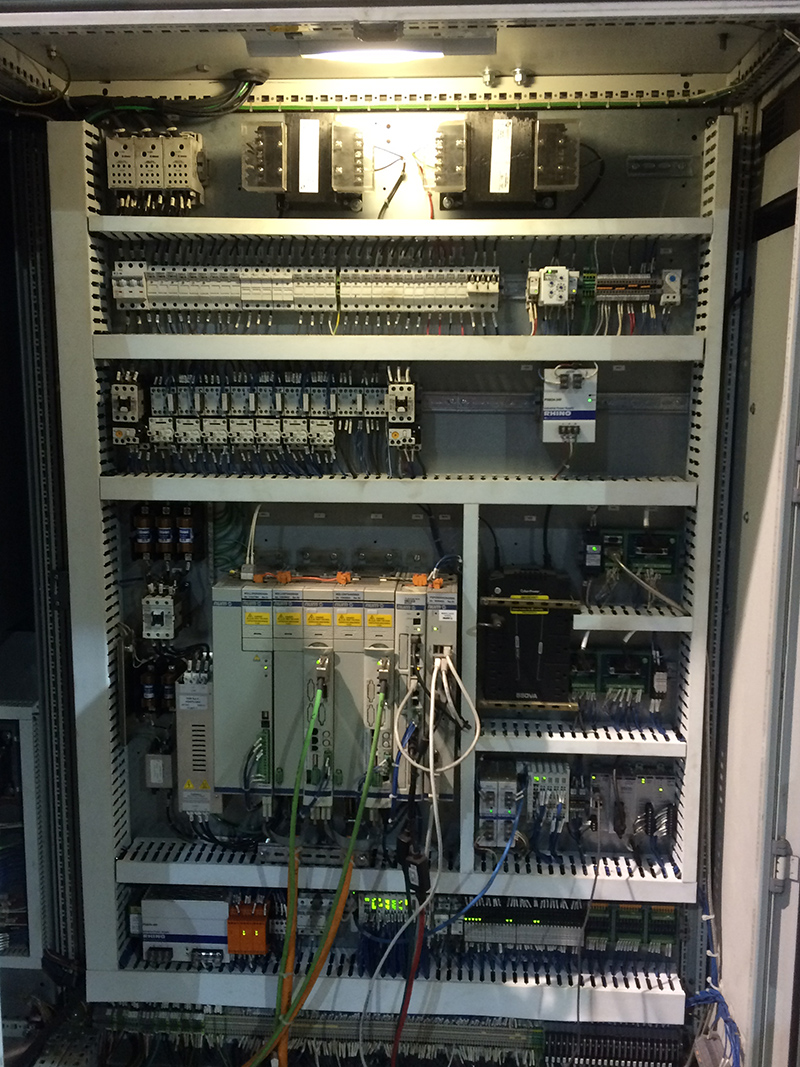 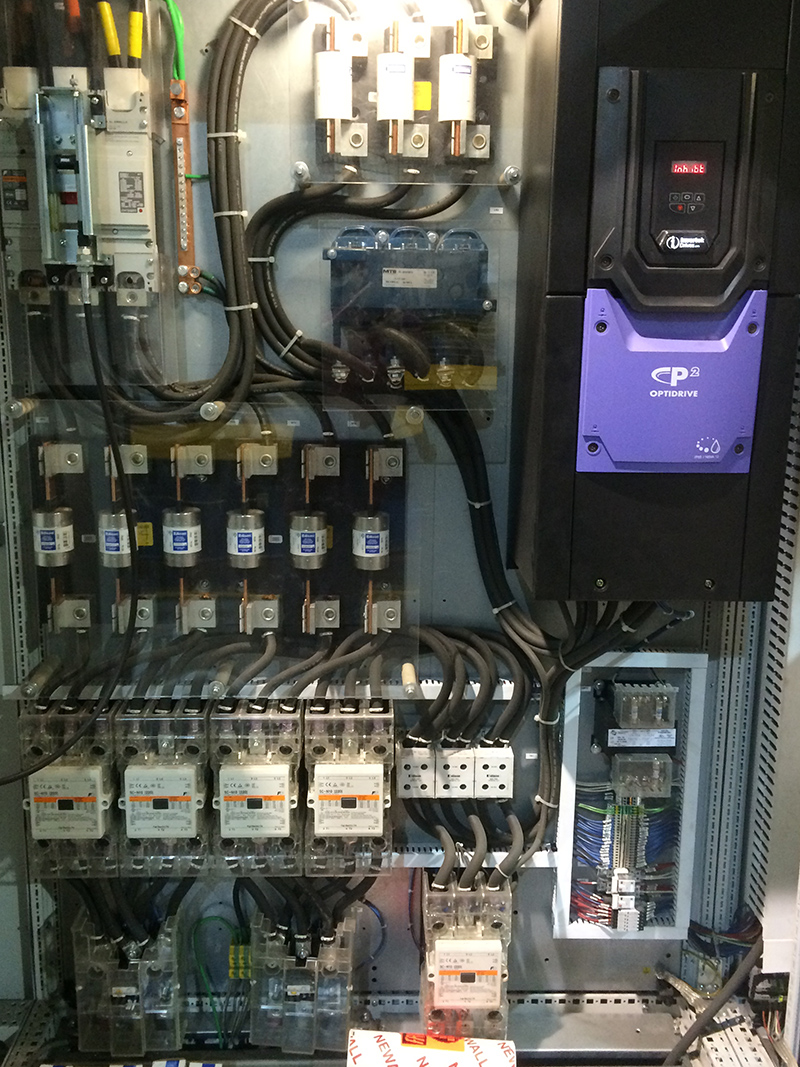 This Waldrich Coburg 35WH 3209 Planer Mill was built in the 1980s. This system was controlled by a General Numeric NC controller and a large 3 bay enclosure full of relays. The present system was no longer running so the customer determined a retrofit was the only option, especially since they were in the process of relocating the machine.

The table on this planer mill is driven by a hydraulic 12” diameter cylinder with a 26 foot stroke. Table positioning was monitored and controlled by encoders traveling on a rack and pinion. Stroke trigger points were set by a cam configuration with motors that master a slave set of motors in the hydraulic control unit tank.

There were two machining heads that were driven by two DC motors. Each motor drove a gearbox which then drove Acme screws for the horizontal and vertical head travels. Each head could be driven independently or together with the other head in a mirror configuration. The selection of axis travel for each head was controlled by clutches selected via the NC control. Contouring was possible with this configuration, however programs were written so that the Y and Z axes slaved to the motion of the X axis (table).

The customer had a new hydraulic system built for the mill. Three 150hp motors were used to drive three hydraulic pumps to supply needed flow. This hydraulic system would require a high volume of fluid for the machining stroke and the return via a 6 inch line going to the table cylinder. A large hydraulic servo valve was mounted on a new manifold which was configured for 1100 ipm in the cutting stroke and 3300 ipm in the return stroke via a regenerative circuit. The CNC would need to not only control the servo valve, but also control the selection on cutting feed valve and a regen valve. The idea was to have all three axes (table-X, Y, Z) interpolate during the cut. MasterControls supplied a Newall 5 micron linear scale for table position monitoring by the CNC and a hydraulic valve controller.

In order to address the unique challenges of this application MasterControls selected the NUM Flexium 6 CNC control and digital servo drives. The Flexium control allowed MasterControls to write custom macros to control the table stroke. The NUM servos control the Y and Z axes and the PLC controls clutching. A Delta Computer Systems RMC75 hydraulic controller is used for the velocity controller connected to the hydraulic servo valve. During the cutting stroke the RMC is geared to an analog servo command coming from the Flexium CNC. Once the cutting stroke is completed the user program posts and M-code that triggers a macro that starts the regeneration stroke. The CNC opens the servo loop and sets the control for feedback only monitoring. The CNC tells the Delta RMC to stop gearing and open loop command the table to a return trigger position at which the PLC tells the RMC to switch back to CNC control.

Special Functions of the CNC systems are as follows: